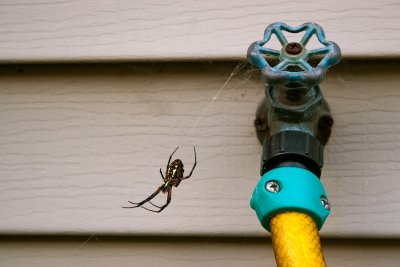 The sight of a spider is too much for some homeowners to take. While flies, bees, mosquitoes, and other insects can all cause a reaction in the average homeowner, there are very few people who like spiders. They like them even less when they are located in a place where they spend most of their time. You can eliminate spiders from your home today by obtaining pest control services near Crystal Lake. Here are just a few of the spiders that you might find lurking around inside your home.

This type of spider is typically yellowish-brown with spots on it. American house spiders are known to frequent closets, garages, sheds, basements, and the spaces underneath of furniture. They don’t have good vision, so they will not usually become aggressive with people.

Domestic house spiders are dark orange or brown and have dark bands on their legs. They like to hide behind furniture and in very dark places like attics, basements, and other places where they are unlikely to be disturbed. They compete for space with other spiders and can spread throughout your home if they aren’t stopped.

Sac Spiders are small hunters that build silky tubes in cracks, creases or hidden in clothing. They are particularly annoying because they will build their silken retreats right out in the open at the top of walls where the wall meets the ceiling. The Yellow Sac spider can be found in homes from coast to coast. They are easily distinguishable by their banana-colored bodies. While they are not really poisonous to humans, their bite can be painful and have been known to wake sleeping victims.

Wolf spiders are active hunters. They are without question the number one spider that causes stress in homeowners. Wolf spiders have excellent vision and can spot humans approaching which helps them to flee. Wolf Spiders are tannish to brown in color and can vary in size from a quarter of an inch up to 1.5 inches. People tend to find them in garages, crawl spaces and basements.