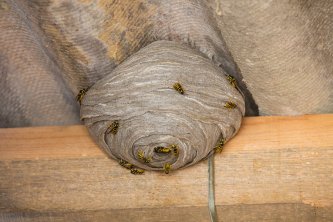 Wasps, as a whole, are important ecological species—some of them are great pollinators while others are fierce predators. The wasps that tend to be pests to humans are the ones that build paper nests and live in social groups consisting of a queen and numerous foraging workers. Two standard nest-building species in the United States are the common wasp ( Vespula vulgaris ) and the German wasp ( Vespula germanica ). If you suspect that you may have a wasp infestation, contact a pest exterminator who is adept at wasp removal near Crystal Lake.

Wasps’ nests are fairly easy to identify once you know to look for. Nest-building wasps can construct their homes with a combination of plant fibers or chewed-up wood pulps, tree resins, and their own saliva. Cells within the structure take on a honeycomb shape, much like a beehive’s, and serve as the places where their young are reared. Sometimes, these nests are exposed to show the densely clustered honeycombs. Other times, they are enclosed with a single opening through which wasps leave and enter. For the most part, these nests tend to have a paper-mâché quality to them.

Where Nests Are Located

Wasps’ nests can be located in a number of places such as in trees and shrubs, and in underground holes. Wasps have also been known to build their nests under roof eaves, in the corners of window frames, in sheds or garages, and in the soffit and fascia areas. If there are cracks or entry points in the exterior of your home, wasps can build their nests within its walls, inside attic or basement spaces, and even inside your living spaces. To determine whether a wasp colony has infiltrated your home, look for signs of entry. If you notice a high concentration of wasps near your home while you are outside gardening or relaxing, watch what they are doing. More often than not, you will be able to witness them leaving from and returning to their nest sites.

How to Get Rid of Nests

After you have identified an active wasps’ nest, you will want to contact a qualified pest control professional or wasp removal specialist. Wasps generally tend to leave humans alone unless they feel threatened. Removing a nest yourself may prove unwise, especially if you or your family are allergic to their stings.

Do you suspect a wasp infestation at your residence? Call 815-385-9511 for pest control services.